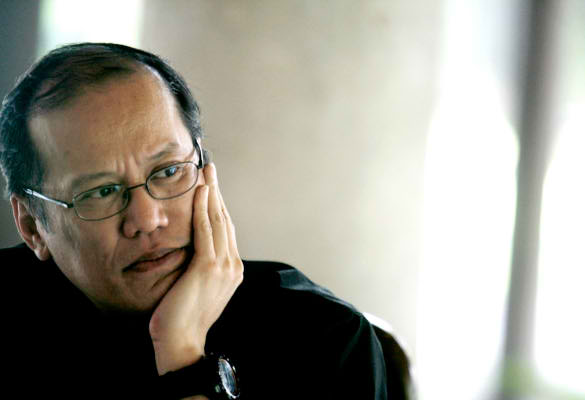 “We’re gonna kill taxis,”  says Geoffrey, my Uber driver for the night. “This service is great. This isn’t even my car. It’s my neighbor’s. Today, I did twenty trips. Uber is a huge company. I read it’s worth billions already. It’s bigger than PLDT,” he added.

When Dado Banatao talks about Filipino startups, you can see the passion in his eyes. Why else would a self-made Silicon Valley entrepreneur and investor spend a weekend coaching young entrepreneurs when he can just sit back and retire? “I’d like to see more Filipino startups succeed. Hopefully in my lifetime.”

You can sense the frustration in his voice too – the sense that despite how much energy he devotes to the cause, the government is not giving its fair share of the deal. You can’t have a relationship when only one person is in love.

“We’ll put the Philippines on the startup map. We’re a tiny dot. But it’ll happen in time,”  Earl Valencia said enthusiastically over coffee more than two years ago. I remembered that conversation because this week, that dream proved prescient. Earl, in his role as Ideaspace president, along with various participating organizations, led the way to host Geeks on a Plane – a tour for founders and investors to visit emerging technology hubs – for the first time in Manila.

What do Uber, Dado, and Geeks on a Plane have to do with the state of entrepreneurship in the country? A few things, actually. And we’ll get to that in a bit.

In the meantime, ponder this: how many times has President Aquino mentioned the word “entrepreneurship” in his State of the Nation speeches? 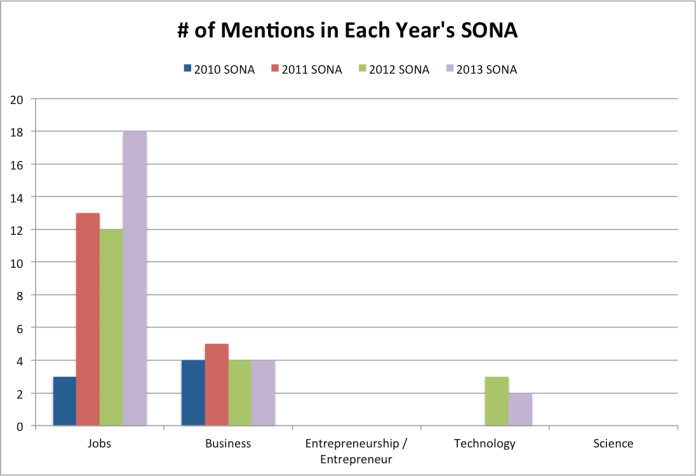 The absence of a spotlight on science, technology, and entrepreneurs fails reason. Sure, there are other big problems in infrastructure, defense, corruption, education, and healthcare. But we can’t have a serious discussion on jobs and inclusive growth if we’re not talking about founders, startups, and the overall entrepreneurial eco-system. And though my world is technology startups, this post is meant to cover entrepreneurs in all industries.

Not convinced that this administration doesn’t have a clue? Here’s another question.

Who is the highest ranking government official to directly engage local startup founders? And I’m not talking about a one-way speech in a huge auditorium. I’m talking about a real, two-way conversation in a safe environment where questions are tough and the answers are equally honest and candid. Sincere engagement.

The answer is United States Secretary of Commerce Penny Pritzker, who recently moderated a panel discussion among local tech and social entrepreneurs in Kickstart Ventures’ Area 55. Her goal: learn about the problems the next generation of entrepreneurs (not the top 40 already established families) and see if there are long term opportunities to collaborate with US counterparts.

US Commerce Secretary wanted to learn about entrepreneurship in the Philippines. Thanks to Mark Ruiz for the photo.

As far as I know, no cabinet secretary of the Philippine government has engaged Filipino entrepreneurs in a frank and intimate setting like this (correct me if I’m wrong!). None have come in with the simple goals of just listening and genuinely demonstrating that this whole high-growth-tech-startups-thing is new to them and that they don’t know all the answers, but are sincerely willing to learn.

There are tons of other examples. Makati, with all its potential to be an innovation hub, still has to develop its own New York-style digital strategy, despite being the richest city in the Philippines’ with Php 12 billion in annual revenues.

That, in a nutshell, is the state of affairs that our entrepreneurs have to deal with. If  founders could say one thing to the government, it would probably be this:

“You don’t have a fucking idea what you’re doing.”

And yes, we can say that. Because we entrepreneurs don’t have a fucking idea what we’re doing either.

We weren’t born in a culture that celebrates risk-taking, ambition and self-reliance.  We didn’t study in schools where solving real world problems is more valuable than a well-written research paper. And with the world changing as fast as it is, we don’t know where the party will be in 10 years, let alone 5.

But you know what? That’s completely okay. We like it that way. We’re humbled by the uncertainty and ambiguity of the modern world.  We like it that we don’t know everything. Because the insatiable desire to work on tough problems, the fear of the unknown, and the persistent optimism to dream a better future are what keeps us going and prevents us from turning into rent-seeking little shits.

In a way, we don’t have a choice. Because for the vast majority of market vendors, fishball hawkers, carinderia owners, and sari-sari store proprietors, entrepreneurship is a matter of survival, not making the coolest app. You can squabble all you want on the constitutionality of the DAP or file impeachment complaints against each other. Tomorrow, we’ll still have customers to serve, employees to support, and greedy municipal officials to fend off.

And that’s the point: the nation’s entrepreneurs are increasingly ambivalent to the role of the state. We are getting things done, with or without its help. Because in this part of the world, we see the state as a hindrance, not as an enabler. I hope it were otherwise.

That’s where Uber – and its equally good cousin Grabtaxi – comes in. Real people on the ground like Geoffrey are starting to see the value of transportation apps like these. You don’t have to be a Bay Area-born techie to recognize its potential to improve the lives of both drivers and riders. It took foreign companies to create a bright spot in local transportation.

Dado – through a partnership of PhilDev Foundation and USAid – is spearheading entrepreneurship education in the country because our public educational system is simply too slow to react and is mired with overpriced classrooms and error-riden history books.

Geeks on a Beach gave us a platform to sell the country – not the GDP / investment grade story – but the real life stories of people on the ground who are tackling big problems with real products. In time, we hope some Geeks will invest. Even better, we hope some of them can found companies that tackle local problems.

The week of July 21st is a testament to entrepreneurs getting things done even without the strong support of the government. All throughout the city, this tiny, fledging startup eco-system was flexing its toddler muscles. Founders, investors, interested-but-not-sure entrepreneurs were gathering in a multitude of events – meeting, chatting, challenging each other, exchanging ideas.

Here’s a quick recap of what went down last week: 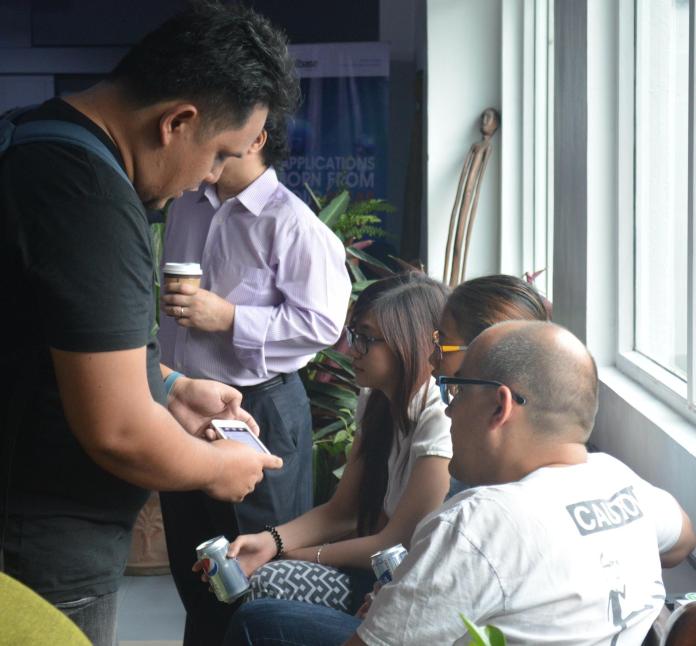 Eric Su showing some action to Dave McClure of 500Startups. Thanks to Kickstart’s Pia Bernal for the photo

AngelHack. Spot the angel in the crowd. PS anyone knows her name?

Geeks on a Plane Tech Summit in AIM. Thanks to @mathony for the photo.

Not everyone in government is clueless, of course. There are bright spots such as Senator Bam Aquino’s efforts to promote small businesses and youth entrepreneurship. So far, the progress we’ve seen is the law establishing ‘Go Negosyo’ business centers all over the country. We have to yet to see if Sen. Aquino can push for more controversial reforms, such as a Singapore-style co-investment scheme for high growth technology startups, pushing our science & technology spending to more than 0.1% of GDP, and a Chile-style Startup Visa.

So what can you, our beloved government, do now? With only two years left until the next election, we have realistic expectations.

Our only request is simple: stay out of the way. No doctor’s-style shaming from the BIR. No additional taxes imposed on small business. No other burdensome regulatory process to add. Just don’t make things worse.

That, ultimately, is the state of the nation’s entrepreneurs.

We are not going away.

You make our lives difficult. But that won’t stop us.

You’re all thinking of elections 2016.

We’re willing to talk. And open to listening. We have tons of ideas to share. Once you do get your act straight and recognize our role in inclusive growth, we hope you come to the table (or bar if it’s #raidthefridge) with an open mind and a sincere desire to understand this brave new world.

And to those with a desire to become entrepreneurs, you’re not alone. We’re here to help. Attend an event. Meet people. Work on a prototype on the side. Test it. Get meaningful feedback. You don’t have to leave your jobs (at least not yet!), but grow mastery in your chosen field. And when the time is right, jump in. And then pay it forward to younger entrepreneurs.